From the book "Social Label Works"

They weren’t asked, they ‘applied’: As participants in the ‘Den Bosch design scene’, Jos Kranen and Johannes Gille from studio Kranen/Gille had already worked with Petra Janssen and Edwin Vollebergh from Studio Boot and were keen to get involved with Social Label. So, in collaboration with WeenerXL, they designed a safety-deposit box made from hand-brushed aluminium. WeenerXL is a large municipal work and development organization in ‘s-Hertogenbosch which employs people on the sidelines of the labour market. The product is called KLUIS.

Jos and Johannes took a desolate former WeenerXL metal workshop and transformed it into a lively mini factory, where they breathed new life into the production of hand-crafted products. They worked together with the makers in the workshop like two Willy Wonkas from Charlie and the Chocolate factory. In the corner of the workshop the designers came across a dusty old sheet metal brake which served as the starting point for KLUIS. The makers who became involved in this project mastered the craft of shaping the metal, in partnership with a work supervisor and a person re-entering the labour market as instructor. By shaping two mirrored aluminium sheets which could easily be folded from 2D to 3D, and then assembling, screwing and drilling they created the first designer product: a safety-deposit box made from hand brushed aluminium for storing valuable items. ‘Particulary Neftely, who is deaf, and Gabriel, who is homeless, really threw themselves into this project’, says Johannes. “Neftely is great at working with his hands and Gabriel is a really good communicator; they complement one another perfectly.’

‘Through this project you learn what meaning in your work is all about. You see that it’s often about motivated people who don’t want to just sit at home, but are keen to work.’ But Jos and Johannes also know that fulfilment for these people doesn’t lie in in folding towels all day long. ‘We can come up with something more rewarding than that. Creating beautiful design products generates a sense of pride and self-worth.’

Kranen and Gille have always recognized the added value of working with other people. But whether or not that’s for a good cause, isn’t an issue for them. ‘We have a click with the organization that produces what we design. It’s about work creation and producing great products with a specific group of makers’, says Jos. ‘Even though with WeenerXL it’s a bit more complicated because there are more limitations, the puzzling, the pleasure in the work and the striving for quality, hardly differ at all from designing for a big label like MOOOI.

The great thing about Social Label, they feel, is that Simone and Petra know how to make the designs interesting and attractive. ‘With these kinds of projects, idealism is often seen as a ‘selling point’, but that excuse is never used here’, says Jos. ‘After all, you don’t have to fall back on platitudes if you create products with a good story. Similarly, the excuse for imperfection is not even a consideration here, because the people who produce for Social Label do so at an extremely high quality.’

‘And the great thing is’, adds Johannes, ‘that you’re not only manufacturing a product, but a project.’ As part of this project, a new addition to the product line is currently in the pipeline, in the form of a writing desk which is actually a large KLUIS on legs. Because the designers know that they shouldn’t start too big and too complex so as not to put too much pressure on the makers, they started with the A6 and A4 safety-deposit boxes . Aside form the scale, the production methor from the writing desk doesn’t differ too much from the safety-deposit box. And this product too is a design with a story, created with pleasure and drive, and which whoever buys it will surely treasure for the long term. 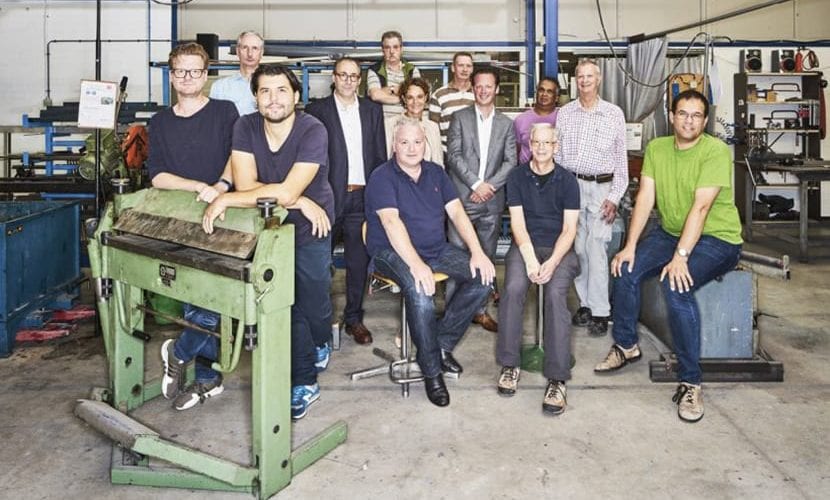